Genetically Engineered Foods in the U.S. that have been Labeled: A Very Short List

The genetically engineered (GE) sweet corn varieties that Monsanto hopes to sell to American farmers this fall apparently will not be the first GE sweet corn to show up in the produce sections of U.S. grocery stores.  According to Monsanto’s web site, pesticide-containing GE sweet corn has been on the market since 1998.  A GE crook neck squash containing a viral protein was commercially available several years earlier than that and a friend in the biotech business tells me it has been continuously marketed in this country ever since.  Additionally, estimates indicate that ingredients from various GE crops including corn, soybean, and cotton are present in 75-80% of the foods found on grocery store shelves in the United States.

As we Americans choose foods to purchase and feed to our families, however, there is no way for us to know which ones contain pesticidal proteins, or the “coat” protein from a virus, or a bacterial protein that confers resistance to an antibiotic, or any other foreign substance intentionally added to foods via genetic engineering.  That’s because GE additives are not listed on U.S. food labels.

But that wasn’t always the case. 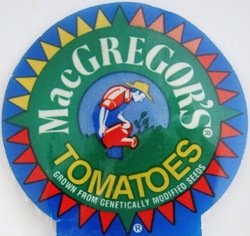 The world’s first commercially available GE whole food was a tomato that carried a sticker proclaiming that it had been “grown from genetically modified seeds.”  Not only that, MacGregor’s® tomatoes were accompanied by tomato-shaped point-of-purchase brochures that explained how their “Flavr Savr™” seeds had been genetically engineered, that they contained an extra protein that made them resistant to the antibiotic kanamycin, and how consumers could contact the company that had developed them to receive even more information about them.

And those labeled GE tomatoes sold like hotcakes (at least initially).  The owner of one grocery store resorted to rationing them; customers could only purchase two MacGregor’s® tomatoes per day.  During the holiday season the same store owner made up gift boxes of GE tomatoes that customers could send to their friends and families.

Not everyone was happy about the GE tomatoes developed by Calgene, Inc. (with some help from yours truly), of course.  Jeremy Rifkin’s Pure Food Campaign staged a couple of small protests over them, for example.  But Calgene had been extremely transparent about the development, regulation, and marketing of its product and therefore all tomato purchasers–whether supporters, detractors, fence-sitters, or “others” with regard to genetic engineering–had a choice when it came to MacGregor’s® tomatoes.

Isn’t that the way a free market is supposed to work in a capitalist society like ours?  I believe it is and that is one reason I’ve started this blog.

In addition to the labeling issue I’d like topics of discussion with participants in the Biotech Salon to include: how genetic engineering specifically differs from traditional plant breeding; benefits, risks, and costs associated with this relatively new biotechnology; and how the current system for regulating the products of agricultural biotechnology in the United States might be improved.  Please stay tuned.

7 Responses to Genetically Engineered Foods in the U.S. that have been Labeled: A Very Short List